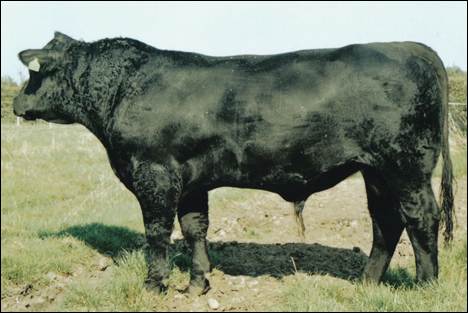 His sire Nightingale Defiance (DAZ) now at Blelack has sons at Wedderlie, Rosemead and Saltway. Jakes pedigree is dominated by 2 Hogan daughters: on the sire side, Duchess R35 (to Jerusalem)  dam of Duchess U4, Dalmigavie (Mollington & Warrenho), Daill (Whitehall & Tofts) and Donnie (Whitfield).

On the dams side Pride of Pershore S44 whose dam Taf Pride 39S was bought from a syndicate formed for the World Forum where she was on display. Pride S44 is also the dam of Netherallen Peter Pershore and Nightingale Picasso (also to Blelack). A full brother to Peter Pershore from the same flush, Nightingale Poundman, has returned to Nightingale see him featured in Present Bulls.

The great Grace 3R is also on both sides of Jakes pedigree Jeanie D237s first calf by Nightingale Kruncher (Jona) was used on heifers in 2007, her second calf is Jake and in 2008, a heifer calf by Karlos have easily promoted her to Donor Cow status along with Pride S44, Duchess R35 and Duchess Z001.

Jakes son Nightingale Playfair was used on heifers and cows in 2011 then went to the Lana herd in Northern Ireland. Playfairs dam Precious Princess was Karlos daughter and calved at exactly 2 years. His 1st calf is out of an Elmark daughter and calve